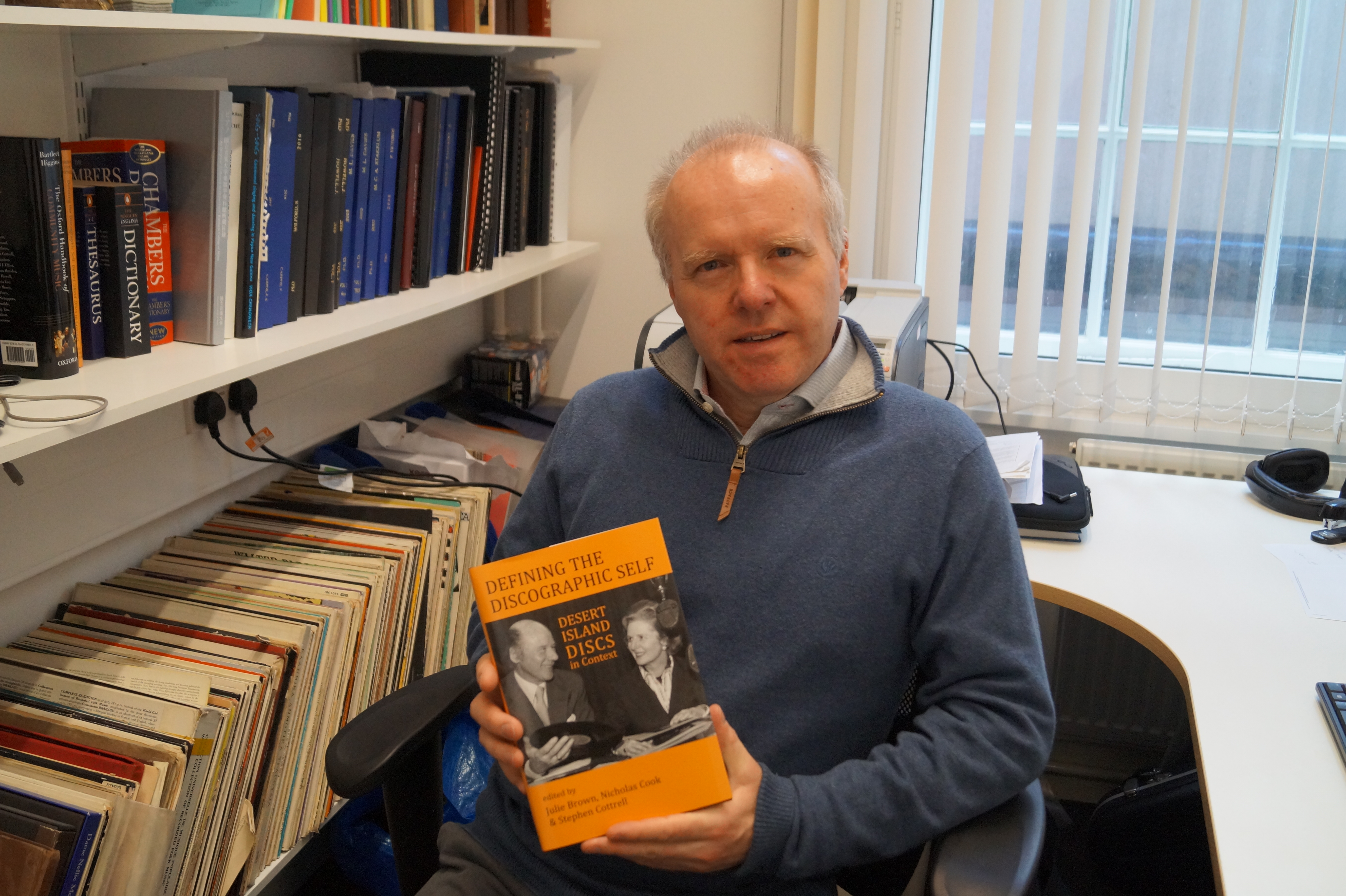 Professor of Music, Stephen Cottrell, with his book

A music professor at City has co-edited a book about BBC Radio 4’s long running and much beloved series, Desert Island Discs.

The book, Defining the Discographic Self: Desert Island Discs in Context, was co-edited by Professor of Music, Stephen Cottrell, and looks at the role that music has played in the series. It features contributions from 12 academics from institutions all over the UK, including one from City’s sociology department, and took almost three years to compile.

Prof Cottrell said: “Because Desert Island discs is held in such great affection by a particular demographic within British society, pretty much everyone we asked to be involved in this project in whatever way said yes as soon as we asked.”

He explained that the book focuses on “the changing place of music in British society” and “the ways in which music is invoked in the public presentation of self, the incorporation of music within personal narratives, and changes in musical tastes during the seven decades spanned by the programme”. Each chapter, authored by a different academic, is accompanied by former castaway’s description of what it was like to prepare for and appear on the show.

Last year marked the 75th anniversary of the programme, which was first broadcast in 1942. The programme was the brainchild of Roy Plomley, who presented it for 43 years until Michael Parkinson took over; it featured comedian Vic Oliver as the first “castaway”, and is currently presented by Kirsty Young.

In 2012, for the 70th anniversary, the BBC released the archived collection of recordings from 1942 onwards, which inspired a conference in 2013 at the British Academy called Desert Island Discs and the discographic self – from where the book was developed.

Notable guests have included everyone from Noel Coward to Margaret Thatcher and from Stephen Fry to Colin Firth. Nine prime ministers in all have featured, but John Major was the only one to be serving as PM at the time, in 1992, to mark the show’s 50th anniversary.

Prof Cottrell, who was previously a portfolio saxophone and clarinet player, authored one of the chapters, Musicianly lives musically told: Oral history, classical music and Desert Island Discs, which focuses on classical music and the tradition of oral history that has been key to the success and longevity of the programme.

Prof Cottrell said: “People are interested in what makes these celebrities tick and the particular pieces of music they choose and how they fit them into the life story that they are telling. It’s an interesting marriage of people and their oral history.”

He added: “The experience has made me more cognisant of how such a simple idea can be so durable.”

Dr Jo Littler, a Reader in the Department of Sociology at City, has also contributed a chapter,  Adrift or ashore? Desert Island Discs and celebrity culture, which examines the “frame of celebrity through Desert Island Discs”. It explores the relationship between “how celebrities are symbolic of ideology”, and argues that there is a shift away from a white masculine demographic.

Dr Litter called Desert Island Discs  “a great disciplinary space” to work in. She added: “It was interesting to see starkly different examples on one topic.”