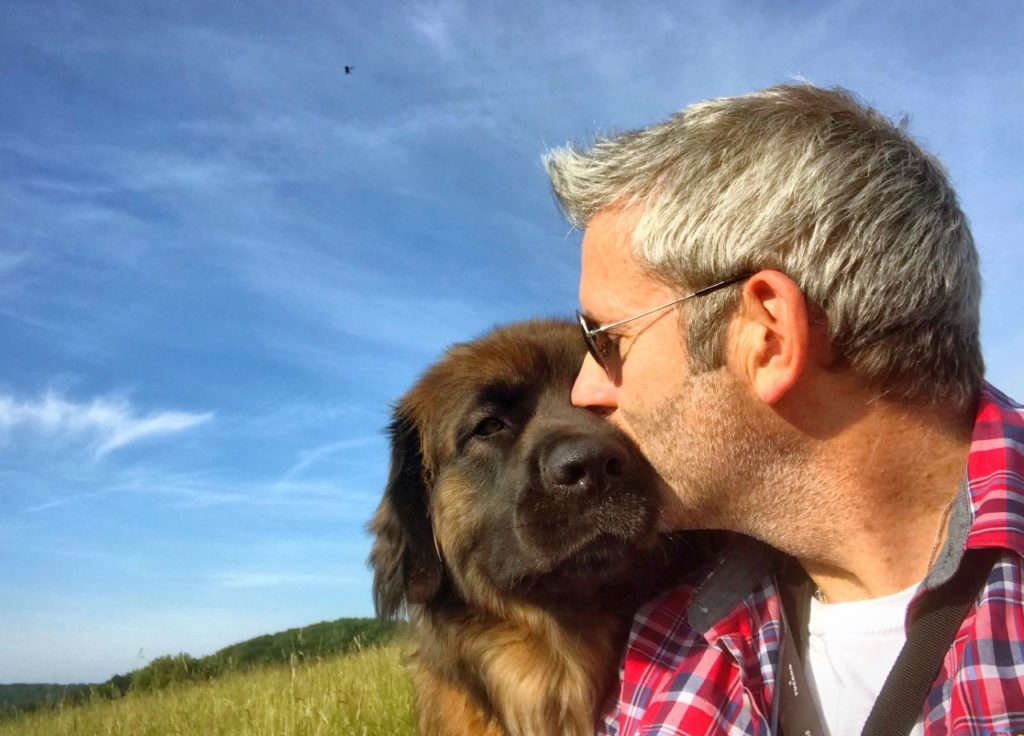 From Tintin and the fearless Snowy to Evan Davis and the infamous Mr Whippy*, many journalists have relied upon pets for inspiration, encouragement or distraction.

What would a journalist be without their news hound? We spoke to five journos to find out how their pet (in one case, their canine landlord) helps or hinders their work.

We’ve had Toffee, our Labradoodle, for five years now. He was very sick for a year because he ate a sock and had to have a series of operations that cost the insurance company over £4,000. But we loved him so much we decided to have it done, and what’s amazing is since then he’s had this fantastic life and is extremely healthy. At the time of his operation, we had a series of discussions on the Today show about the ethics of veterinary interventions. Toffee became quite famous for a bit as there was a feature about him in the Daily Mail and people still come up to him in the park. He definitely gets recognised and thoroughly enjoys the attention.

I work very strange hours on the Today show and the great thing about that is it’s quite compatible with having a dog. Most days I’m home by 10 a.m. It’s great for the exercise, the fun and the affection but it’s especially nice if I’ve had a really difficult day where everyone’s shouting at each other on the programme and there’s thousands of emails saying “I didn’t think that guest should have been on”. After all the everyday harassment that modern journalism engenders, it’s really nice to have a dog who doesn’t know or care about any of that stuff.

Kevin Maher, chief film critic of The Times, and Elsa

My dog is Elsa, a four-year-old Leonberger, and she is utterly inscribed within my writing routine. So much, in fact, that if she’s not smothering my feet under my desk or walking beside me across the fields on feature breathers, I feel the words coming unstuck. She is the proverbial tonic.

And yes, I work in London, and go to screenings there, and do interviews in Soho, and have even written an article or two in that quiet cafe with Wi-Fi problems at the top of Wardour Street. But Elsa is intrinsic to the schedule, and her presence moulds my day. I give her a huge leg-stretcher at the crack of dawn before I disappear. I then sometimes return for a lunchtime treat, and am gone again, but also back again later, keen as custard for an evening stroll.

But it’s the writing that really matters. She gets it. She sits there, head down, lying sprawled, sometimes whimpering as she dreams, sometimes awake and attentive. But I feel the connection and she keeps the flow going. Sometimes she’ll sit up and just nudge me and look. And I’ll look back. And in that look, that face to face, eyes to eyes, there’s a quiet spark of contact and, in my mind at least, she’s saying, “Keep going! Only another 400 words to go! It’s all sharp, quality prose, and I’m loving what you did with the opening para.” Of course, she’s probably just hoping for a dental chew, or the second half of the dried chicken strip on my desk. But it’s in the imagining that sanity lies.

Liz Dodd, home editor at The Tablet and freelance for National Geographic, and Chirps

Chirps the cat never learned to meow or do much of anything. She snuck into our houseshare as a stray kitten seven years ago, evicted, we think, from a local litter, and never left. Raised by humans, she believes she is one, and gets around the obvious discrepancy in height by travelling on our shoulders like a parrot.

She is neurotic, tries to join in human conversations, cannot use a cat flap and only drinks from pint glasses – basically a carbon copy of her humans. She likes to get in the way of my work, literally, by sitting on my laptop keyboard. But there’s also no better stressbuster on deadline day than playing her favourite game, chase the wiggly worm on a string.

Porridge is our pseudo landlord as he’s owned by Clare who runs the building. He patrols the building and regularly knocks on people’s office doors asking to be let in. He’s always bustling around checking everyone is fine and still within the terms of their lease. Porridge is particularly active at lunch, and takes a very keen interest in the activities of all staff during that period of time.

He sometimes surprises you when you’re writing or meeting with clients. If you have a bare ankle, you’ll suddenly feel a tongue lap over it like a damp piece of ham. He is affectionate and likes to sit on laps. Porridge is good for morale and we’re all very happy when he comes by on one of his patrols.

Marlowe is a one-year-old cockapoo who enjoys nothing more than meeting new people and running at full speed wherever he goes.

Marlowe has primarily helped me de-stress at the end of the week. As a digital journalist, I have multiple deadlines throughout the day so sometimes it does get on top of you, but having Marlowe around to stroke helps alleviate a lot of that stress.

Occasionally when I work from home, he’ll get in the way of my work (he hates not being the centre of attention), but most of the time he’s great and really helps me with my mental health.

*Mr Whippy was approached for this feature, but his busy schedule means he has been unable to comment as yet. If you’re reading this Mr Whippy, my DMs are open.