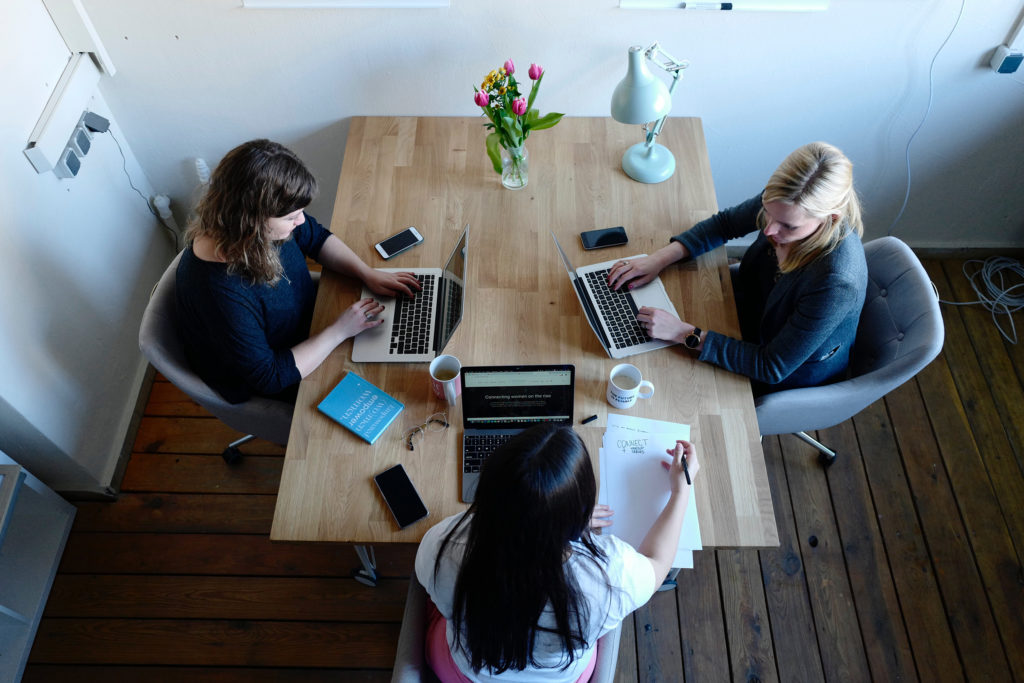 More than 25,000 journalists are now freelance, up two-thirds since the turn of the millennium. While across the country as a whole, more men than women are self employed, in journalism the gender balance is equal.

Going freelance brings freedom and flexibility, but it can also be a financially precarious and uncertain lifestyle. In light of these stats, XCityPlus asked three female freelancers what motivated them to leave their jobs, and what freelancing has given them the time to do.

Sarah Graham, 30, is a freelance journalist specialising in mental, women’s sexual, and reproductive health, gender and feminism. She writes regularly for Grazia, The i and Refinery29.

My first job after doing the Newspaper MA at City was at Feminist Times (the online feminist magazine which closed after 12 months), which was an interesting experience. I enjoyed the work, and because it was a small all-female team of three I got to do everything from editing to commissioning, writing, social media and moderating comments. I did quite a lot of press stuff around the launch as well, which built up contacts.

But we didn’t have enough money and it was very stressful. We had committed to paying all our writers but were struggling to pay ourselves. Around a year in, I got married, came back from my honeymoon and told my editor I couldn’t do it anymore because it was starting to affect my mental health.

I did all my City work experience in national newsrooms at The Guardian, The Times and The Telegraph. Having had such a unique, intimate, female-focused first job, I wasn’t sure whether I wanted to go back into a newsroom. I was slightly put off by the macho culture. My mental health was struggling as well at this point, so I needed the flexibility to be able to work in my pyjamas and look after myself a bit. While I wasn’t doing the most interesting stuff at first, I found quite quickly (particularly through the contacts I’d made at Feminist Times) I was able to start making a decent living doing stuff I was interested in and enjoyed.

Freelancing is undeniably precarious. Six years in, I’ve learnt a lot. I’ve realised if I have a good month, I need to be able to save some of that as a buffer for a bad one. Being prepared and having some money set aside to start with helps.  You need to be constantly on the grind and be able to cope with the fact that you will be in this almost permanent state of anxiety.

But given the state of the industry, in some ways freelancing is more secure than relying on one publication for employment. Particularly when The Pool closed last year, I realised that I have more stability as a freelancer than some people because if one of my publications goes under, there are others.

A couple of years ago my husband and I moved out of London. I wanted to be somewhere where we could afford to buy a house and have a garden and get a dog, which has been really good for my mental health. I’m glad I went freelance. Looking to the future knowing I’ll be able to be flexible around having kids, if and when that comes up, is great.

Leaf Arbuthnot, 27, worked for The Times and The Sunday Times before going freelance in November 2019 to concentrate on her debut novel, Looking for Eliza.

I was at The Sunday Times for about three years doing features, interviews and book reviews, during which I also worked on The Sunday Times Magazine. I finally moved to The Times where I wrote leaders for about a year, but I was also doing poetry reviews for the TLS which has been a parallel track in my career since I started.

Meanwhile, I was also writing my first novel, Looking for Eliza, which comes out in May. Balancing having to turn it around in quite a short period with a full-on job at The Sunday Times was a challenge. I would do things like write before work, or for an hour in my lunch break, or in the evening. I set myself the goal of 1,000 words a day. In November, I left The Times. Currently, I’m doing two days a week at The Spectator and reviewing podcasts for The Mail on Sunday, which keeps some steady money coming in.

Been asked to sign my first ever book! It’s a proof but still. Quite weird and nice. I got the year wrong and had to cross it out.🦉 pic.twitter.com/3vSvMrsg0u

Going freelance was always on my mind, but as an editor dealing with lots of freelancers I had a front row seat to seeing how stressful it could be, which put me off. I dealt with people chasing invoices and asking when their pieces would be published. But then again I had been going to the same office for four years. Now I can cycle around in the day time, work whenever I want and pitch stories I’m interested in. I don’t think there’s a decent novelist who doesn’t read voraciously, and I just did not have the time or headspace to do that before. Having the freedom to focus on what I want has been a joy.

Even as a kid, I was very self-regimented. I used to write daily plans for myself in the holidays. Being able to respect the boundaries I impose on myself makes me suited to freelancing as you do have to have quite a lot of discipline. Then again, you also need the discipline not to work 24/7.

Viv Groskop, 46, is a freelance journalist who wrote columns for The Guardian and the Evening Standard. She continues to write, but has branched out into stand-up comedy. Her new book, Lift as you Climb: Women and the Art of Ambition, is out this March, and her podcast, How to Own the Room, has featured Hillary Clinton and Margaret Atwood.

Getting up on stage as a comedian seemed like a crazy thing to do when I was enjoying my life as a freelance journalist. But doing comedy was an ambition that I had set aside, and I couldn’t get rid of the idea. I think there are times in life when it’s easy for us to ignore something that we know we should try, and other times when we feel we are letting ourselves down if we don’t just actually do it.

Two things helped and forced the switch to comedy. First, the financial crash of 2008/2009 and the increasing dominance of social media meant that the face of freelance journalism changed radically just as I was starting comedy. There was less work around, and this gave me more impetus to make comedy work. Second, I lost two major contracts back-to-back in early 2009. I had a features contract at The Guardian that came to an end and I was sacked from my column on the Evening Standard. I had a lot of other work so this wasn’t a disaster, and I was already moving into comedy when this happened. It just made me more determined.

When I started performing comedy, I didn’t think of myself as leaving journalism. I continued to write and on the surface my day-to-day life didn’t change very much. Most of my apprenticeship in comedy happened in the evenings, which included a period when I did 100 gigs in 100 consecutive nights in 2011. I essentially started to work a double shift: freelance journalism for a variety of publications in the daytime and comedy at night.

Changes in direction and trying new things are both inevitabilities. The ‘job for life’ or linear career died out long ago. It surprises me how resistant we are to change, even if that change is not particularly hard. I mean, how difficult was it for me to go and do a weekend comedy workshop? I think we get caught up in wanting to know what the outcome will be further down the line, when in fact all you have to do is take the next logical step and go from there. You don’t have to know the end point of something before you even know what the beginning looks like.

Want more? Check out some of XCityPlus‘s other latest content here.