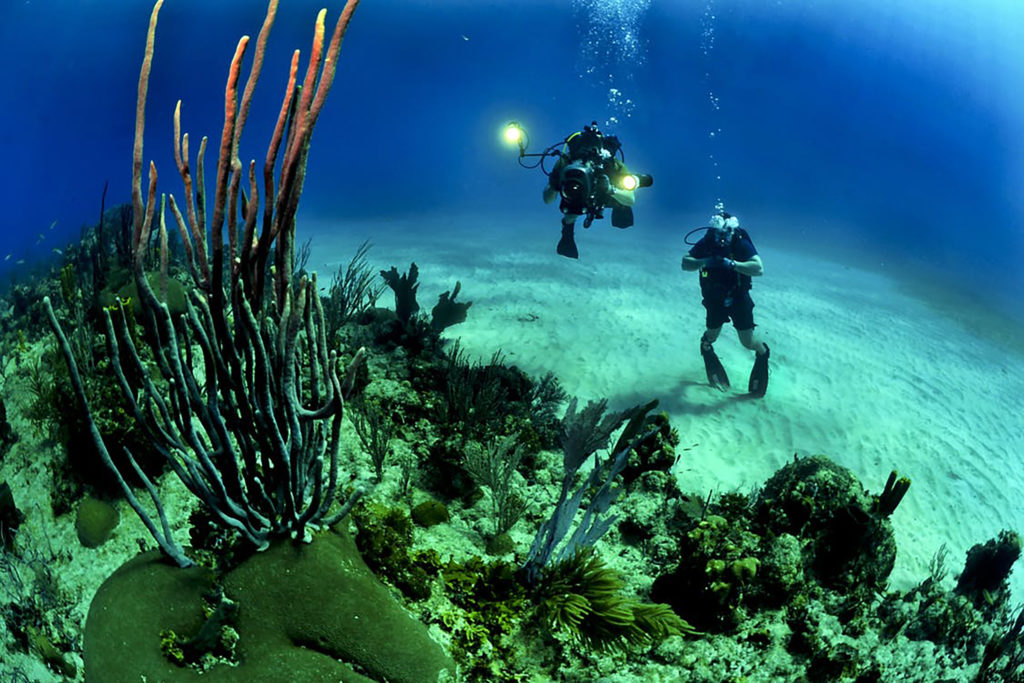 Guardian Australia’s new six-part series on climate change uses cutting edge multimedia techniques to tell a variety of stories about the worldwide crisis. ‘The frontline’ combines imaginative video and audio with informative text and visual data representations, so that each piece feels like a cross between a meticulously crafted feature article and a short documentary.

‘The Dead Sea’, for example, is about the disappearance of sea forests off the coast of Tasmania due to rising temperatures. The page headline is surrounded by a bird’s-eye view of a stretch of sea accompanied by the sound of gently swelling waves. As the reader scrolls down, audio of diving instructor and biologist Mick Baron describing his memories of the underwater forests plays over video footage shot beneath the sea. As he talks, light pink fish busily move through dense, swaying green kelp.

Further down, text appears over a video of divers, informing the reader that the forests, which protected a vibrant ecosystem, started to die in the 1960s. Graphics and maps also feature, contextualising the story and visually conveying the science.

Combining different forms of media, the piece effortlessly holds engagement while placing one human story within a wider context. XCityPlus asked Dave Fanner, the head of multimedia at Guardian Australia, about the process of putting the six pieces together.

What potential do you think multimedia offers that print can’t, and how do the different elements of multimedia interact?

There are three pillars to a multimedia project like this, and we work to the strengths of each of them. Video is perfect for conveying emotion and engaging instant empathy with the viewer. We react in a primal way to powerful imagery. The trade-off is that video, unless we’re talking about a feature length documentary, can be light on the facts.

Text lacks that instantaneous emotive power, but can go so much deeper. In the case of this series, it is the job of the text to provide context for the more personal visual elements. Of course, being a videographer, I would think that. A writer would probably say the inverse, that it’s the video’s job to humanise or help sell the glorious writing.

Finally, strong visual data representations in the form of graphs are equally important to the series as they convey larger contextual information, anchoring our subjects in the wider world.

Writing is initially done by the journalists who went out on the assignment, then it’s subbed by the executive producer. She will look at the assembly cuts I’ve made of the footage, then we’ll sit down with the development team and try and get a draft up and running. Honestly, I can’t speak highly enough of Marni Cordell’s work as executive producer. It’s the hardest, most complicated and probably most thankless role on a project like this.

So I think multimedia projects like this leverage the strengths of three different journalistic devices – video, text and data visualisation – in one compelling package.

We even dedicated an episode of our narrative news podcast to the ‘Dead Sea’ article. So that’s video, text, data and now audio – another bloody pillar. I really don’t think you can tell as complete a story with just *yawns* plain old text.

Obviously a paper needs resources for this sort of project – did you have everything you needed?

Yes. In March 2019, we went to our readers and asked them to fund a new series that focused on Australia and the climate emergency. Having a healthy budget and the full backing of the editor meant we were able to travel to where the stories were, and most importantly, we had the time to interact with our subjects and to capture the required footage without rushing. That kind of luxury is pretty rare.

Were there any major logistical challenges that had to be overcome?

This is more a question for Marni as the EP, but she would probably tell you that trying to wrangle a bunch of journos, developers and videographers together was (and still is) an ongoing struggle. Thematically, I do remember many a meeting trying to figure out how to tell so many different personal stories while maintaining some kind of central through line.

From grape to grain: how a warming climate is changing what we eat and drink https://t.co/8AqczPhaWB

This is ‘The Lost Harvest’, the final episode in @GuardianAus‘s multimedia series #TheFrontline: inside Australia’s #climateemergency pic.twitter.com/WhThIIleQM

What was the process of making the first feature, which was about the recent fires in Australia?

We were still filming and writing the original six-part series when the bushfire season really got out of control. We knew we couldn’t just launch a series on the effects of climate change on Australia without addressing the worst bushfires in our history, so this feature became a kind of prologue to the rest of the series. Basing it around an interactive map was the idea of Nick Evershed, our data journalist, as it was the most obvious way to navigate the different fire fronts and convey a sense of the scale at the same time. I would say there were at least 15 staff members who were involved at some stage in the feature.

What are the restrictions and challenges of this multimedia approach?

There are still some problems, of course.  One is the cost in both time and resources – both are big, complicated factors. From a delivery perspective, a huge problem is having to shape our final product on the lowest common denominator internet speed. You have to constantly pair your ambitions to make the most immersive experience possible with the technological realities of the time. I’m pretty excited for the future of multimedia journalism if the rollout of 5G is half as good as promised, so we’ll see how that plays out.

Want more? Check out some of XCityPlus‘s latest content here.