It is November 2016, and David Smith is at the New York Hilton hotel for Donald Trump’s election night party. Trademark scarlet caps are displayed in glass cases, like holy relics promising to make America great again.

The evening begins quietly, with few expecting a Trump win. But as the results roll in on giant television screens, excitement bubbles through the gathering crowds. The Guardian journalist poses as a Republican as he works his way through the sea of red. Suddenly, he hears an almighty roar.

Smith feels very hot. His head aches, and he rushes to the bar for water and a painkiller. When he looks up at the screen, bold letters read: “Donald Trump elected US president.” He cannot believe it.

Having become The Guardian’s Washington DC bureau chief in October 2015, Smith has covered the entirety of the Trump era. From women’s marches and the Black Lives Matter protests, to explosive tweets from America’s reality-star president, Smith’s work has had a tumultuous backdrop over the last six years.

The Washington reporter recalls the turbulence of covering US politics since the shock of Trump’s win, right up until the surreal inauguration of Joe Biden which seemed overshadowed by a pandemic and insurrection.

“For most of the last 100 years, if you’d gone from conflict zones in Eastern Congo to America, everyone would have said that’s a complete switch”

The Washington reporter laughs when I ask him if working in turbulent countries helped prepare him for life under Trump. “It’s sad, isn’t it? But it did. For most of the last 100 years, if you’d gone from conflict zones in Eastern Congo to America, everyone would have said that’s a complete switch.

“Trump was arguably the biggest threat to American democracy since the Civil War that culminated in months of false claims about election rigging, and an insurrection at the US Capitol. But I also saw parallels with Africa in the resistance to that.”

Smith celebrates the media for exposing Trump’s lies, and groups like Black Lives Matter for pushing back against the president. He believes American democracy survived the ultimate test.

When Smith arrived in the US, Obama was in his last year. “It seems like an oasis of calm compared to what was to come later,” Smith says. At his first White House briefing in the West Wing, he felt like he was on a film set. It’s a compact room that used to be a swimming pool. “It’s like Doctor Who’s TARDIS in reverse – it’s smaller on the inside.”

“This is no longer a joke about a reality TV celebrity. Here is a clear danger to democracy”

Those briefings were calm. Seats were empty, and there seemed to be very little news. The real action was taking place elsewhere as a former reality star started his political trail.

Smith travelled to various Trump rallies throughout the campaign, and he began to notice: “This is different. This is alarming. This is a real rebellion against the notion that all politicians are the same, because this guy is running as someone who breaks the mould, an insurgent against his own party.”

At the time, Smith wrote about the reality of Trump’s threat. He adds: “This is no longer a joke about a reality TV celebrity. Here is a clear danger to democracy.”

The media gave Trump huge amounts of coverage until he became the man to beat. “I understand why the media did that,” Smith says. “Are you going to cover a normal politician making a boring speech? Or are you going to cover the guy who might throw a dead cat on the table or say that his opponents would be jailed?”

Trump’s relationship with the media was a pantomime. “His supporters would jeer and boo the press and I think some of them meant it and others you could see they were kind of laughing. They were in on the joke. It was a piece of theatre and they were actors in it.”

There was a worry about violence towards journalists, but Smith found his British accent gave him protection. Trump supporters would always be friendly to him. While Smith stood there with a notebook, they told him that all the newspapers should be burnt down. He was white and British, so Smith felt Trump’s followers seemed to divorce him from the press they were talking about.

He recalls that at the first press briefing in January 2017, former Press Secretary Sean Spicer blasted the journalists with accusations that the media had distorted photos of the crowds at Trump’s inauguration to make them look smaller. After 10 minutes, he walked out without any questions. The BBC’s Jon Sopel turned to Smith and said he felt he was back in school. Smith replied that he felt he was back in Zimbabwe.

Trump spewed rhetoric about journalists throughout his presidency, but Smith wonders whether he was the most transparent president in history. “He might write something nasty on Twitter, about The New York Times and The Washington Post, but in the same breath five or 10 minutes later, he’d be talking to them in the Oval Office or on the phone.

“He was the most hostile president to the media, but he was also the most accessible president ever. His Twitter feed gave us endless insight into what he was thinking. It was full of insults and abuse and bad spellings, but it was unprecedented to be that transparent.”

Smith had the opportunity to ask questions of Trump in the White House – he didn’t have that with Obama and may not with Biden.

“Trump is pretty much the same as you see on TV,” Smith says. “At cabinet meetings, he’d be sitting with all his secretaries and he was the big gorilla in the room.” Smith adds that Trump is a larger-than-life figure, surrounded by cartoon villains, and so the stories were practically handed to journalists on a plate. “The bloke with the shiny red tie, and bright orange hair, does tend to grab the attention.”

By the 2020 elections, Trump had lost some novelty value – and then there was the issue of the pandemic. Conventions were virtual and debates were reported from TV screenings, which made it less satisfying for political reporters.

Smith had once stood in a crowd of Trump supporters as they revelled and thrilled over their president’s win, but this was a very different election. Smith says it no longer seemed to be about who would win the presidency, but about whether American democracy would survive.

“It was only in the hours and days afterwards as footage emerged you realised how serious it was, how deadly it was”

This came to a head during the fallout of the results, with Trump refusing to accept defeat and telling lies that led to an insurrection. Smith watched the storming of the Capitol from a hotel room in Atlanta, while he was covering the Georgia Senate run-off elections.

“At that moment, it was a big story. But it was only in the hours and days afterwards as footage emerged you realised how serious it was, how deadly it was in terms of five lives lost, and what a fundamental assault it was on democracy.”

Weeks later, Smith was at Biden’s inauguration. Downtown Washington had been turned into a militarised zone with electric fences and soldiers, and that was on top of coronavirus restrictions. “But it’s such a privilege as a journalist to be an eyewitness to history unfolding at events like that,” Smith says.

Since the inauguration, the Biden administration seems to be reverting back to Obama’s norms in terms of how it operates and disseminates information. Smith laughs as he says: “Were the last four years all just a crazy dream? Have we woken up and just moved from Obama to Biden, having recovered from our Trump nightmare?” 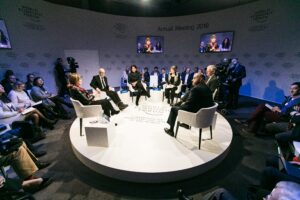