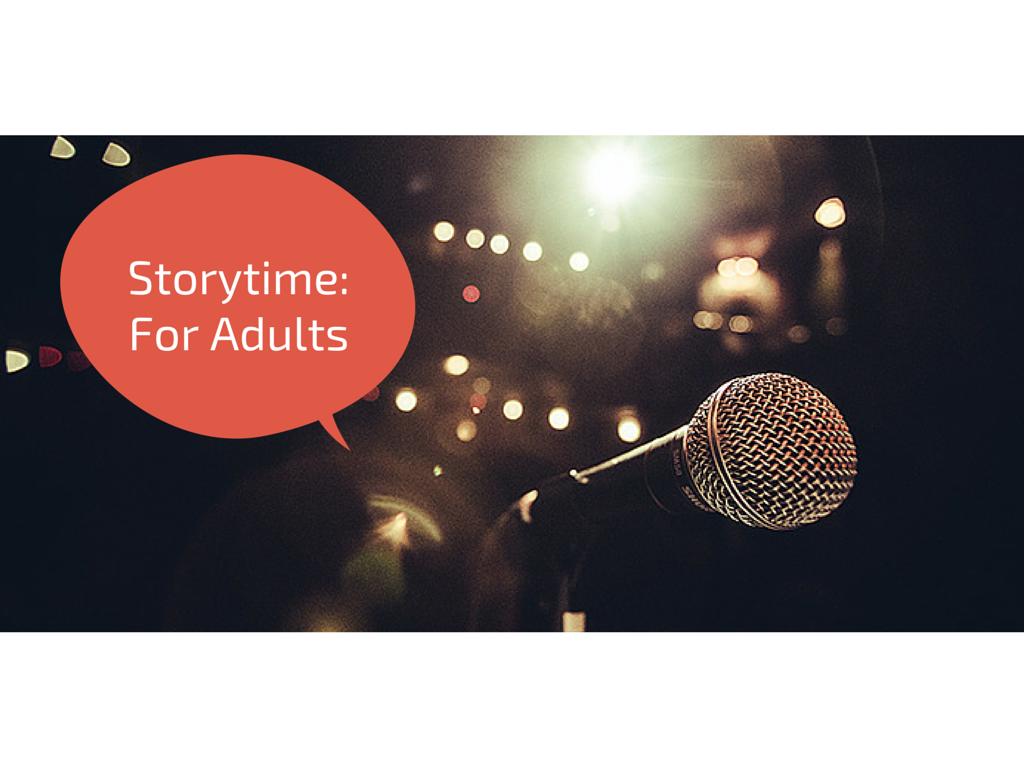 Think you could tell a story from your life in five minutes in front of a crowd of strangers?

As I walk down the stairs into the crowd of people, I don’t know what to expect. A woman in front of a black curtain guards the next room. When it turns 7pm, she draws back the curtain to reveal a red room (no, not the kind in Fifty Shades of Grey). Downstairs, chairs and pillows face a small stage and a microphone. The crowd piles in for tonight’s entertainment at The Moth.

The Moth is a non-profit arts group based in New York city dedicated to the art and craft of storytelling. Founded in 1997 by poet and novelist George Dawes Green, the organisation has grown in popularity throughout the US and now crossed over to Dublin and London.

Dawes Green created the idea to recreate the feeling of sultry summer evenings in his native Georgia, USA, where moths were attracted to the light on his porch as he and his friends gathered to tell frightening and spellbinding tales. Named ‘The Moths’, storytellers vary from prominent literary and cultural personalities to the average salesman. So long as you have a fascinating story to tell, you’re welcome.

The art of direct experience is on the rise, with classes throughout London relishing the opportunity to ditch technology and bask in the beauty of performance. Poetry workshops, including the Poetry Café in Covent Garden and Kings Cross Novel Reading group, are becoming increasingly popular. You only have to look at the popularity of Ted Talks, with over 800 million views on Youtube, to see that people want to share ideas out loud and not hide behind a computer screen. But while other direct experiences simply require you to speak out loud, The Moth has its own rules:

The Moth is strictly non-fiction.

The story you’ve prepared should be intrinsically related to the theme for tonight’s show.

3. It must have stakes

A story needs action and the action must have consequences. What is gained or lost? What is the urgency? What is the conflict? What is the goal and who or what is blocking it? How did the trip from Point A to Point B change or shape you?

4. It must be your story to tell

Were you there? Are you one of the “main characters” You involvement in the events as they unfold is essential. No journalism. Eyewitness accounts only!

Yep. You’ve got to squeeze all that in! Slam stories should be five minutes long, plus one grace minute.

The premise is simple. You have five minutes to tell a true story based on a theme of the Moth’s choosing. Stories are told, not read and learned by heart.

Tonight’s presenter at The Book Club in Old Street is Charlie Partridge, a twenty-something guy from Nottingham

“I want you to invest in these people, show them that you care,” he says as we practice our round of applause and sympathetic stares. Three groups of friends are chosen as tonight’s judges: Blood Sweat and Shears, Peroxide Undercut and The Split Ends (they all sound like they could be back-up singers for Spinal Tap).

“Judge the story, not the teller,” Partridge says as seven acts proudly place their stories into the hat.  There’s no turning back now.

Here’s a sneak peek of some of the night’s best stories:

1. Olga Koch.
Olga told us about the importance of blonde locks in her family. She explained how she would hold her long hair to the side when she went to the toilet as to avoid “pooping” on it, which made us roar with laughter/disgust. Her mother forbid her from cutting her hair – even shaving her body hair – and one day in tennis club, she was practicing her serve and was mortified to see everyone looking at her armpits. Defiantly, she walked through the door at home that evening and demanded a razor- her first act of teenage rebellion. In the following years, her hair went from short to blue – anything to show that it was hers to be enjoyed.

2. Ben Murphy
Poor Ben. The summer before his final year of school, he rebelled in the only way he knew how – he died his hair peroxide blonde. Inspired by his favourite musicians, Kurt Cobain and Johnny Rotten, Ben and his sister took to the bathroom with a pot of bleach.

With L’Oreal blonde dye, his sister combed through his hair. “How long should we leave it in for?” he asked. “Like, 45 minutes?” his sister replied. Waiting for the dye to work, Ben endured the burning and itching of bleach on his scalp. Once washed, he looked in the mirror in horror. His hair wasn’t the peroxide blonde he had aimed for. “It was more lustrous golden retriever.”

In the weeks that followed, sunlight turned Ben’s hair from golden blonde to “salmon pink”. In a bid to save it, he went to his mum’s hairdressers and discovered that the only option to save the mop was to shave his hair off. “So I went home and found the electric shaver. At the time I thought we only had one shaver in the house, the one that my older brothers used. I didn’t know the dog had one too. Someone should have thought about labelling them maybe.” Ten minutes later, he was left with a skinhead, topped with a few strands of the dog’s coat.

After a night out, Ross decided to stay in a friend’s spare room. He was awoken in the middle of the night to what sounded like Darth Vader. Moments later, he realised he was making the noise. Stumbling to the mirror, he was hit with horror – his face and chest were red and swollen. Scratch marks on his chest suggested he’d been attacked by Wolverine. Suddenly, he remembered playing with his friend’s kitten – he must be allergic to cats.

Not wanting to rudely wake his friend in the middle of the night, he did the “sensible thing”. He crawled his way to the end of the road, checked the street name and called and ambulance.”

When the paramedics came, they gave him oxygen and gave him his emergency information sheet. On it read: “Reason for emergency – scratched by a little black kitten.”

The Moth offers a weekly podcast of over 33 million listeners that is available here.
The next Moth event in London is on 1 April at The Book Club, Old Street. Theme- Fool. Buy tickets.