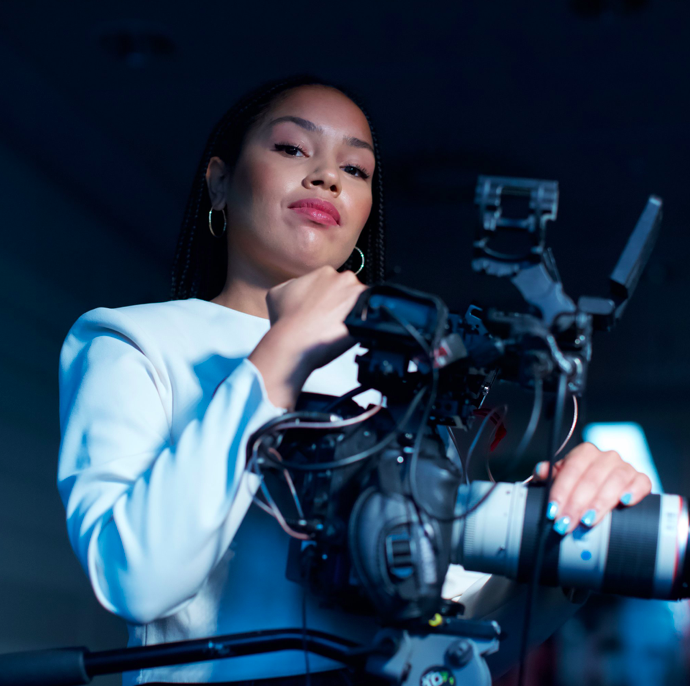 Rianna Croxford is good at firsts. The first in her family to attend university, the first Journalism Diversity Fund Financial Times intern and now, at 26, the BBC’s youngest ever network news correspondent.

In a year of health-focused headlines the responsibility she faced, after becoming the BBC’s community affairs correspondent in March 2020, has never been greater. “I hadn’t imagined that I’d get to where I am at all, let alone so quickly,” she admits.

“That’s where I built my hunger for breaking stories”

But Croxford has swiftly marked herself out among a new generation of BBC faces, with her agenda-setting investigations and discussions of taboo subjects. She is the journalist that broke the story about Priti Patel’s staff member receiving £25,000 over bullying accusations. She reported on the higher risk of death from COVID-19 for individuals from ethnic minority backgrounds. In mid-November, it was her BBC News investigation that uncovered failures in the diagnosis of serious medical issues during private baby scans.

Yet what appears to be a quick rise through the BBC ranks has in reality been far more reserved. While undertaking her NCTJ diploma at PA Media as a Journalism Diversity Fund recipient, she reached out to the FT, one of its sponsors, and was offered a six-month news internship. “That’s where I built my hunger for breaking stories,” she says. A BBC radio trainee scheme followed, with her landmark appointment to community affairs correspondent, the culmination of almost two years at the corporation.

But it was Croxford’s Panorama investigation into the death of Belly Mujinga airing in October that brought her international acclaim. Following reports that Mujinga was coughed and spat on by a customer at London’s Victoria Station weeks before her death, Croxford re-examined the evidence, lines of inquiry and claims that the transport worker could have been better protected at work.

“Actually, you can do meaningful stories for these communities that will have mass appeal”

“I spent about four months working quite closely with all of her relatives. Obviously, you’re not a campaigner. But you are there to do her family justice, insofar as finding out the truth,” Croxford says.

Watched by over three million people, the 30-minute documentary prompted two million to sign a petition and join a ‘Justice for Belly’ campaign. Just last week it was announced that an inquest into her death would be held following the questions the documentary raised.

“To also bring a story that clearly affected what people sometimes call undeserved audiences into the mainstream,” she says, “and show that actually, you can do meaningful stories for these communities that will have mass appeal – that was really good.”

It is combatting this disconnect between communities and the media that Croxford, now a correspondent in the BBC News UK investigations team, is keen to highlight. Voicing her concerns when interviewed by Press Gazette in December, she said: “There’s been such distrust in [certain] communities at how they felt represented in the media, really having people who they feel are objective, impartial and sympathetic has helped in being heard in that way.”

“If you look at the broader stats, only 0.2 percent of journalists are Black,” Croxford tells me. She was also one of only four Black journalists to ask a question during the Government’s daily coronavirus press conferences between March and June 2020.

“You are the person who listens and reports. And you always have to separate yourself from the narrative”

And this sensitivity has been crucial to her work reflecting the human stories of pandemic. “Day after day you’re hearing of thousands of people dying. But you’re rarely seeing anyone in person at all, it felt so disconnected,” she says. “It was difficult, because after a while, you are just simply reporting on other people’s pain, trauma, grief, bereavement, and that is in many ways, a lot of responsibility to take on.”

“But,” she adds, “You are the person who listens and reports. And you always have to separate yourself from the narrative.”

Despite her aversion to becoming the story, Croxford hasn’t escaped scrutiny and accusations of bias. Once the first port of call for impartial news, recent years have also put the BBC under increasing pressure. In June 2020, Croxford woke to find a photograph of herself splashed across half a page in the Mail on Sunday. Accused by Government minister Kemi Badenoch of “sloppy, agenda-driven journalism”, the headline read: “BBC accused by Minister of fanning racial tensions over Covid AND Black Lives Matter.”

I will be requesting payment from The Mail on Sunday for using my photo without consent and without offering a right of reply before publication, which I intend to donate to support families disproportionately affected by coronavirus: https://t.co/FdoB1EDT0V pic.twitter.com/Tsx5R1khAL

“I wasn’t just getting trolled on social media from members of the public. It was a response to an opinion piece by a government minister that had led to the abuse,” Croxford says. “I don’t know if you can really prepare for that.”

A month later, the Daily Mail and Guido Fawkes published further stories claiming she was a biased “Corbynista correspondent” and “diehard campaigner for Jeremy Corbyn”, following the discovery of a handful of pro-Labour tweets she sent in 2017 as a student. Then in August she was named a “Labour Activist”, in a letter sent to the BBC’s new director-general Tim Davie and signed by 15 Conservative MPs.

For Croxford, “the irony is”, she admits, that it was impartiality that initially sparked her interest in broadcast journalism.

“There was a kind of level of safety in impartiality,” she explains. “I think definitely now when the culture feels so much more polarised in some ways, there is a kind of safety there, in just presenting both sides and being like, you make up your mind. I’m not here to influence your views. I’m just here to report on the facts now that we know.”

But in the face of such public scrutiny, does Croxford feel the need to be liked? “No. That’s what I like about investigations. I don’t think I would be doing the public any justice, or I’d be serving the public well enough if I wasn’t prepared to ask difficult questions, or tackle difficult subjects,” she says. “We shouldn’t feel intimidated out of reporting for doing so.”

It is this reporting that has landed Croxford a new host of firsts, winning a MHP Communications #30towatch Young Journalist Award in News in July and named New Journalist of the Year at the British Press Awards 2020 in December. Just three months ago, she was also nominated for “Young Talent of the Year” at the Royal Television Society Awards 2021.

Not that this success has made her grand. “I couldn’t have imagined a more important year to have started and to have made an impact,” she says. “To know I’ve actually contributed during this time: that’s a really good feeling.”

Next post News as resistance: Reporting Myanmar
Tweets by XCityplus